Chili/chile peppers: How hot do they get? 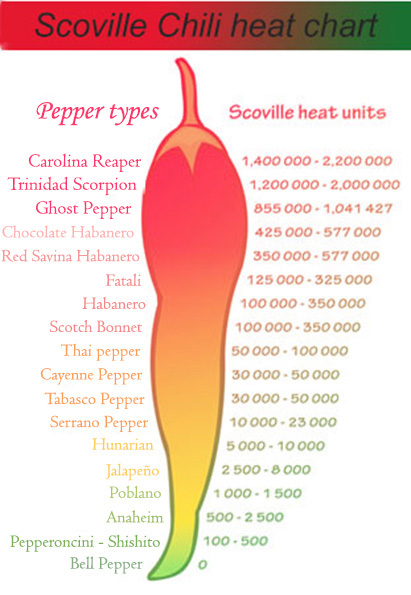 Chili peppers are varieties of capsicum pod which are hot and spicy. They range in taste from only flavoring types to really hot chili peppers.

The name of peppers can vary from region to region, hence the different spellings. It is either “chili pepper”, “chilli pepper”, or “chile pepper”. “Chilli” is more commonly used in England and Europe. “Chile” is the most commonly used in America’s Southwest regions and particularly in New Mexico. “Chile” is actually the Spanish spelling and pronunciation of the word. However, “chili” is more common in general usage and spelling, an Americanized spelling of the original “Chile” spelling that came out of Mexico.

The Scoville Scale is a measurement of the heat and pungency of chili peppers where each pepper is recorded in Scoville Heat Units (or famously known as SHUs).The heat of a pepper is measured using Scoville units: The scale ranges from 0 as in bell peppers all the way to over 2,000,000 as in the spiciest chile in the world, the Carolina Reaper Pepper and the Trinidad scorpion.
What creates that burning sensation on our tongues and makes us sweat is the capsaicin. It’s the chemical compound found in peppers, and you can find it in the oil residing in the pepper or seeds.

When cooking with chili peppers, one must take precaution and wear gloves and ensure protection of the eyes. It’s recommended not to touch any sensitive part of your skin or your eyes when preparing chilies. Wearing gloves can help protect your skin when chopping chli peppers. After slicing or chopping the peppers, use cold water to wash your rubber gloves, the chopping board, knife, and any other utensils that came into contact with the pepper or its seeds. This is important: if you're not careful, they can cause some serious irritation.